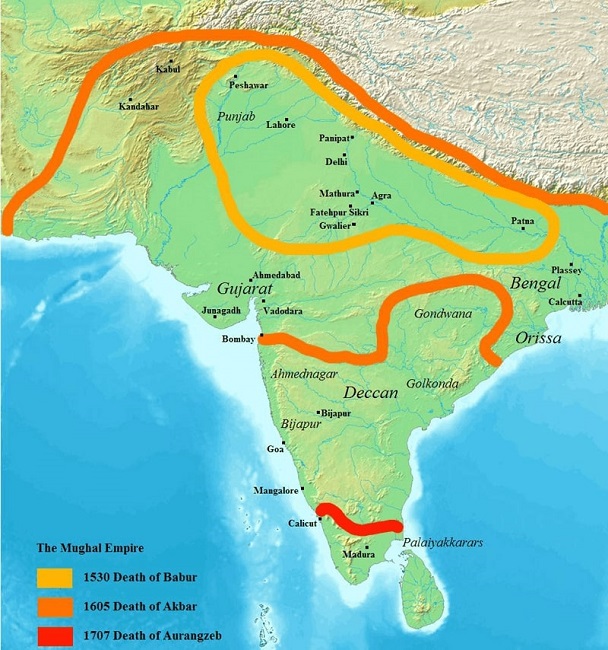 The Mughal empire designates the empire created by Babur in 1526 and was disappeared with the colonization of India by the British in 1858.

The word Mughal is derived from the name Mongolian, Babur always said to be inherited by mughal powers because his mother was part of Genghis Khan’s family and his father was from Turkish Chaghatai community.

Before the creation of the  Mughal empire:

Babur is the descendant of Tamerlane who reigns over Central Asia, Tamerlane created Timurid empire and whose Samarkand was the capital. Empire of Tamerlane was maintained itself willy nilly. It wasn’t strong empire. On the death of Tamerlane, his empire was divided between his grandchildren who was grandfather of Babur inherits the region of Ferghana. When he ascends the throne, Babur was only 12 years old and has to face a revolt of the aristocracy. Babur assures his throne by crushing the revolt. In 1497 and 1514, it was time of war against the Uzbeks and Babur lost all its territories. He went to Kabul where he settled his capital. From 1521, he harassed the Sultan of Delhi, Ibrahim Lodi. It was April 21, 1526. By winning the battle of Panipat Babur became master of northern India and became the first great emperor of the Mughal empire.

Emperors of the Mughal empire

After defeating to Sultan of Delhi, Babur proclaimed himself emperor of India and seized Agra. In 1527, he won the victory against Rana Sangha and became the undisputed master of Northern India.

He spent the rest of his life organizing his empire.

The legend says that when Humayun, his beloved son fell ill, he begged God to take him in his stead. Babur died on 26 December 1530 and was buried in Kabul.

He spent most of his reign fighting, was stuck in the war of south and east, he was obliged to flee in 1540 to Persia. Thanks to the Shah Tahmasp I (king of a persia) who gave him an army to regain his throne, he again settled.

To conquer India in 1544, After a bitter battle with his brother for control of Kandahar, he set out for Northern India. In July 1555, he returned triumphantly to Delhi after 15 years of exile.

From his exile in Persia, Humayun brought back Persia as the official language of the kingdom and a taste for Persian culture that was found in Mughal art.

On his death, his wife Hamida built a mausoleum for him in Delhi, It was the first place with a garden, which marks the beginning of the golden age of Mughal art.

Considered as the greatest empire of the Mughal emperors, Akbar (greatest in Arabic) brought stability to his empire and an original organization. He was only 14 when he succeeded for his father. He freed himself from the regency of his tutor Bairam Khan after 4 years. From his reign, one can retain a territorial enlargement as well as a great religious tolerance. He refuses forced conversions of all religions, bring Hindus, Muslims and Jesuits to debate religion before him.

Akbar as a great builder, built Fathelpur Sikri as mughal empire’s new capital. We also owe him the strong red of Agra.

The end of his reign is marked by a war against his son Salim, the future emperor Jahangir eager to be on the throne.

During his reign, the empire remained in a state of permanent war in order to increase its territory. He found himself confronting formidable opponents like Malik Ambar in the Deccan to whom he dedicated a miniature. The head cut on a peak, Malik Ambar receives the arrows of Jahangir.

During his reign, art, literature and architecture prospered. He was responsible for the gardens of Shalimar in Srinagar.

Surely the most famous Mughal emperor in the West. His love for his wife, Mumtaz Mahal, caused him to built the Taj Mahal, the most beautiful monument in the world and a symbol of the country. He also built Jama Masjid of Delhi, the largest mosque in India as well as the fort and gardens of Lahore.

During his reign the empire grows towards south, thanks to his son Aurangzeb who took Daulatabad in 1633 to grow his empire.

Under Shah Jahan, Mughal architecture reached its peak. His reign is also marked by a hardening towards non-Muslims.

Aurangzeb imprisoned his father at the red fort of Agra, to punish him for supporting his brother for the succession of throne.

He is the last great Mughal emperor. The empire reaches its territorial apogee spanning virtually all of present-day India, Pakistan, Afghanistan, Bangladesh, and parts of northern Burma.

He was a warlord throughout his reign. He has opened many conflicts with minorities such as Sikhs in the Punjab or Marathas in the Deccan. He transferred his capital to Aurangabad to control the advance of his troops in southern India. He led a simple life, he banned music and the arts at court. He is often described as a despot, religious intolerant and cruel. Audrey Truschke’s book tries to restore the reality of Aurangzeb’s reign.

His reign marks the end of the empire that will disappear 101 years after him.

Most of Mughal emperors after Aurangzeb had no greatness reigning for less than 10 years. In the year 1719, six emperors were there to reign Mughal Capital. The last of the Mughal emperors, Muhammad Bahadur Shah, was dethroned by the British and exiled to Rangoon.

Challenges for the new major of city