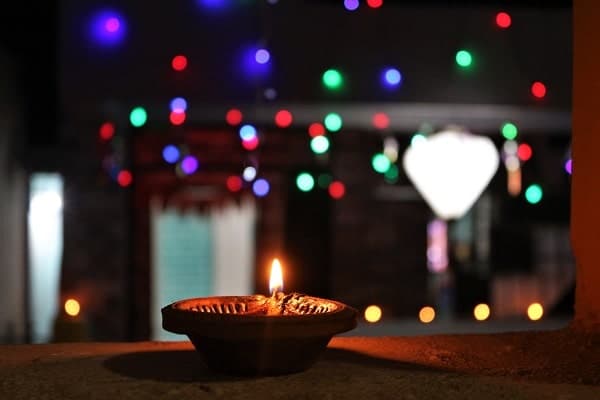 Diwali: the most important festival in Hinduism

Despite a rather dull year and full of bad news, we celebrated Diwali on November 12, 2020 for 5 days. Diwali is the most important Hindu festival. Also called as the festival of Lights, Diwali has religious but also cultural significance.

Diwali: a Hindu festival with a strong religious significance

The Festival of Lights has always impressed foreign travellers. Many have mentioned it. When was Diwali celebrated for the first time?

The mythological origins of the festival of lights

In Maharashtra, Diwali is associated with the God Ram returning to Ayodhya after 14 years of exile. This is the epilogue of the epic described in the Ramayana.

Ram’s father, Dasharatha, sent his son into exile driven by his wife who wanted the throne for her own son. Ram went into exile with his wife, Sita, and his brother, Laxman. They settled on the banks of the Godavari River. This place is known as Nashik in Maharashtra. It is here that Ravana kidnapped Sita to avenge her sister who had her nose cut off by Laxman. After an epic and helped by Hanuman, Ram and Laxman succeeded in freeing Sita from Ravana’s clutches. Once released, everyone returned to Nashik. Dasharatha realizing his mistake remind Ram to return to Ayodhya.

When he arrived in the capital, many lamps were lit and a festival was organized. Being the seventh avatar of Vishnu, He came back to Ayodhya accompanied by Laxmi, Vishnu’s wife.

Since then every year, Laxmi has been worshipped by lighting diyas (terracotta oil lamps).

Many texts from historical figures refer to the festival of lights. This is the case, for example, of King Harsha who speaks of a celebration where lamps are lit and brides-to-be received gifts. This text written in the 7th century is called Nagananda.

The Sankrit poet Rajasekhara mention Kavyamimansa from 9th century also refers to a celebration where houses were whitewashed and lamps were lit in houses, streets and night markets.

Through the centuries, the festival of lights has also been described by foreign travelers.

In the eleventh century by Al Biruni who was a Persian historian, explains that Diwali is celebrated on the New Moon day of the month of Kartika. Niccolò de Conti gives a full description of the celebrations. From his memories, we know that Diwali celebrations haven’t had much since the 15th century (Read until the end for that information). Domingo Paes describes his visit to a temple during the Diwali period in the 16th century.

The Muslim empires, through the voice of their historians, have also described the celebrations surrounding this important Hindu festival. It is also said that Akbar participated in the festivities during his reign.

We can see that Diwali is a holiday that has been celebrated continuously from at least 1500 years.

It’s not just a Hindu festival

It is very reductive to think of Diwali as a uniquely Hindu holiday. All religions born in the Indian subcontinent celebrate Diwali. Each in its own way.

Jain Diwali is very similar to Hindu. Lamps are placed in front of the houses, the jains also make offerings and prayers to Laxmi. On the other hand, for them, Diwali is the celebration of the nirvana of Mahavira on the 24th Tirthankara. For the Jains, the tradition of lighting diyas (lamps) began on the day of Mahavira’s death in 527 BC. 18 kings were present to follow the teachings of Mahavira and they issued a decree saying that the diyas were to be lit in remembrance of the light that was Mahavira.

Diwali is not a holiday for most Buddhists around the world. The only exception is Newar Buddhists in Nepal who practice Vajrayana Buddhism. The celebration is the same as of the Hindus.

It is noted that since the 1950s there has been a movement to convert lower castes to Buddhism. These conversions are done to escape the caste system more than out of religious fervor. It is therefore common to see Indian Buddhists celebrating Diwali like other Hindu religious festivals.

While Hindus pray to Goddess Laxmi, Sikhs celebrate the liberation of Guru Hargobind (the sixth guru of the Sikh religion) from Gwalior Fort by Mughal Emperor Jahangir.

For this celebration, houses and Gurdwaras (Sikh temples) are illuminated. They also organize festive processions. It is one of the 4th biggest celebrations of the Sikh religion.

As a universal celebration

This part is more of a point of view than a historical or spiritual point. I think Diwali could become a national moment of unity like Christmas in Europe. Indeed, everyone celebrates Christmas and it has become a universal celebration. In a divided India plagued by extremism, Diwali could be the week of the year when everyone comes together, decorates their homes, the streets could be lit too.

How is the festival of lights?

There are several celebrations during this 5 day festival. As we are specialised in the culture of Maharashtra, we describe the event of Diwali as per the tradition of Maharashtra. There are differences between all regions of India.

Diwali preparation is as important as the festival. You start to tidy up and clean your house or office. Diwali coincides with the end of the fiscal year. We get rid of what we no longer use. We also buy new clothes. Once this is done, we start to decorate the house. We hang lanterns and garlands around the house, vehicles or work space. 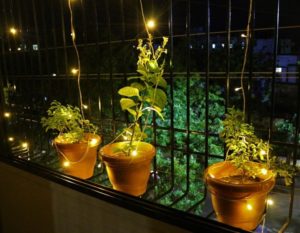 For Hindus, the cow is sacred and it is important to worshipped. This is why on the first day of Diwali, we pray to the cow. A tradition that is disappearing more and more in the cities, it is still alive in the villages. We paint the horns of the cows and we proceed to prayer. Married women keeps a fasting day in order to bring health and happiness to her family. There are even beliefs which say that a sterile woman fasting on that day can give birth.

This is the preparation day for the entire Diwali festival. The women compete in techniques to make the most beautiful rangolis (drawing on the ground with colored grains of sand). They make a different design for each day of celebration. This is the day when no one buys anything to keep money flowing in the home for rest of their life. In the evening, a small puja takes place. 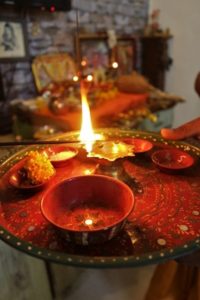 It is the most important day of the festival. We start the day by bathing in oil or utane (mixture of spices) in order to purify ourselves completely. The women bustled into the kitchen to prepare a delicious meal.

At nightfall, we prepare to celebrate Diwali by putting on our new clothes for the first time. We all gather around the altar created for the occasion around the image of Laxmi. It can be a statue or a painting. We perform the puja dedicated to Laxmi. Then, we light all the lamps with the lamps used during the ceremony. 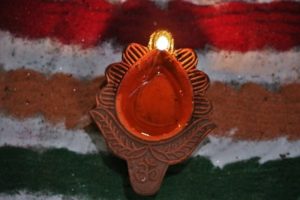 Then young and old alike meet outside to light some fireworks. This is happening less compared to decades ago due to the pollution. Then everyone comes home to have delicious meal. Windows and doors are kept open to welcome Laxmi, a symbol of prosperity into the house.

This day is the celebration between husband and wife. the spouses exchange gifts and blessings.

The last day of Diwali is dedicated to the fraternal bond between brother and sister. The women of the family come together to perform a puja praying for the welfare of their brothers. Then there is a ritual which consists in feeding her brother with the hands and receiving gifts. This is the day when men choose to travel to meet their sister.

Celebrating Diwali with an Indian family 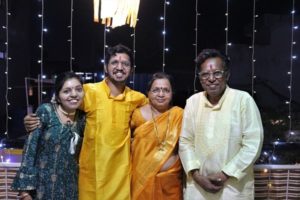 Diwali celebrations are family celebrations. That’s why the best way to enjoy these 5 days of festival is to celebrate them with an Indian family. Since the foundation of Akvin Tourism, we have been working for cultural exchange during trip. If you want to spend the next Diwali with a family from Maharashtra and thus fully enjoy Diwali, you can tell us about your next trip plan.