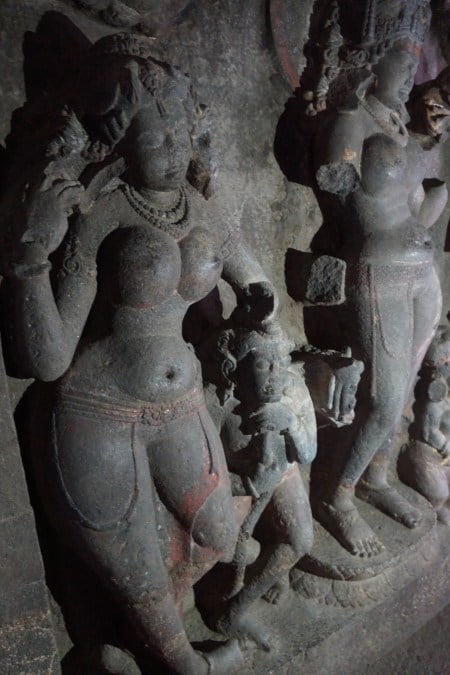 Before introducing you to the caves of Aurangabad, it is important to explain introduction of Buddhism in order to read the presence of temples in the region.

Buddhism started in the north of India between the 7th and the 3rd century BC.

When Siddarth Gautam awaken in the life, that was the starting point for this new religion. He was born heir of a kingdom in southern Nepal today and was dedicated to a life of luxury. A prophecy says, that he will become a great king or a deliverer. To make sure that he would fulfill his destiny as a king, his father locked him up in a garden where only beauty and relaxed living reigned.

While growing up, Siddartha was asked to leave the palace to meet his kingdom’s people. Despite the precautions taken, he met 4 people, a patient, an old man, a corpse and a hermit. These four meetings made him discover the realities of life and the existence of Karma. He therefore decides to abandon his palace to devote himself to find the way for making himself free from the cycles of rebirths or Samsara. He awaited for awakening life under the Bodhi tree in Bodhgaya.

Although inspired by Hinduism, this religion stands out in particular on the subject of caste. The Buddha is also considered a master, a guru, but not a god (at least at the start of the Buddhist era).

When the Buddha died or took Mahaparinirvana, his disciples travelled all over Asia to spread his message. In India, Buddhism experienced a significant boom, especially with the emperor Ashoka. During his reign, Ashoka encouraged the spread of Buddhism in Southeast Asia as well as in Central Asia. India is known for Buddhist emperors for 4 centuries.

Decline of Buddhism in India

Even if Buddhism developed in Southeast Asia to become the state religion of many empires, in India it is another matter. Indeed, dissension appeared between the different schools of Buddhism. The loss of royal protection also weakened religion. There was also a movement of expansion of other religions like Jainism or Hinduism.

The presence of Buddhism in India was therefore threatened. It is the Muslim invasions which leads to the disappearance of this religion on the grounds which saw it being born, destroying the religious sites as well as the Buddhist libraries.

Renewal of Buddhism in India

There are certain movements which want to re-implant Buddhism in India from the end of the XIXth century. From 1890, the Dalits (the untouchables) reconversion movement was born.

It is B R Ambedkar who made this movement a reality and a success. He is one of the main drafter of the Indian constitution. He is especially the defender of the untouchables or Dalit persecuted by the Hindus. This lawyer relaunched the movement of conversion to Buddhism in order to get them out of the most vulnerable populations of the caste system. The movement gained momentum because in 5 years the proportion of Hindus went low from 82% to 80% in India.

It was this movement of conversion which bring up the Hindu nationalists of the RSS and later the BJP party of Modi.

The caves, a tradition rooted in Maharashtra

Between the 2nd century BC and the 6th century AD, it was at the same time as the spreadsheet of Buddhism, the creation of caves / Buddhist temples throughout India.

Out of the 60 caves in India, there are 28 in the state of Maharashtra including Ellora and Ajanta classified as UNESCO World Heritage Sites. These caves contain Buddhist temples and monasteries as well as other functions. The peculiarity of its caves comes from the fact that they were carved from top to bottom. The most famous caves are Ellora and Ajanta. The caves of Aurangabad are fewer and less impressive than those of Ellora or Ajanta but are a good introduction to this unique art. 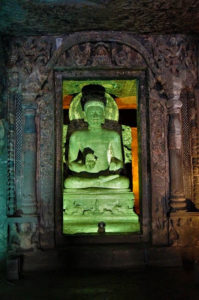 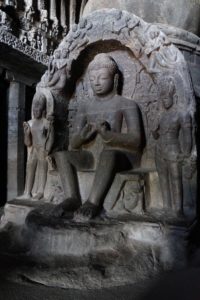 The caves of Aurangabad

The history of the caves of Aurangabad

There are two series of caves in Aurangabad. Each is one kilometre apart.

The first group dates from the 5th century. While the second is from the 7th and 8th century.

All caves are Mahayana Buddhist caves except cave 5 which is Hinayana and cave 6 which is Hindu. It is believed that following an earthquake that destroyed the front of Cave 1, the artisans preferred to abandon the Aurangabad caves to join the Ellora caves site for a better purpose.

The first group of caves in Aurangabad

This cave is the highest cave of the first group. It is unfinished. When we arrive in front of it, we realize that it must have had pillars but these have been destroyed. It is assumed that it was an earthquake which destroyed the front of this cave and which led to the abandonment of Buddhist temples of the site. You can still admire some carved columns.

Just before entering this cave, you can admire on the left, an artificial water tank. Proof that the site is a place of life for the monks and not just a sacred place or reserved for ceremonies. Cave 2 is quite small. We see from the entrance, a statue of Maitreya, the Buddha of the future. One can go around and will discover different representations/mudras of Buddha as well as remains of painting.

It is the most impressive cave of this first group. It is a temple which represents the most spectacular picture with groups of deities. The door frame of the sanctuary is made up of loving figures in small panels and nagas acting as guards. The square pillars are beautifully carved with foliage and geometric designs. You can also see monks’ rooms on the sides. 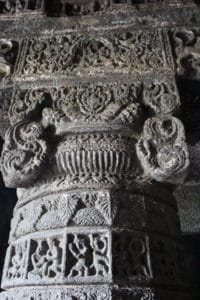 The front of the cave here also collapsed. It’s a stupa. The new pillars have been consolidated so that this cave does not completely collapse.

Replica of cave No. 2 in smaller size and less art work.

The second group of caves

In this cave, a statue of Buddha is located next to a statue of Ganesh. In order to show the unity, peace between religions.

It is the most majestic cave. It’s a temple. In the Garbhagriha (room where the main deity resides in the Hindu temples), there is an statue of Maitreya where sun comes to touch the feet every morning. On the left, you can admire the scene of a dancer accompanied by 6 other dancers.

The female figure of Buddhism:

This statue represents Amrapali, a royal courtesan of incredible beauty. She vowed to serve food to the Buddha. Despite his reluctance, he went to her house. After this meeting, Amrapali renounced her position and followed the Buddhist path. In the next room, you can admire Tara’s life. The ceiling is decorated with a semi-circular frieze.

To the left of Cave 7 a huge bodhisattva prays for the deliverance of the eight dangers: fire, enemy sword, chains, shipwrecks, snake lions, mad elephant and a demon (representing death).

These caves are not accessible.

This last cave is not finished. Still, it has two important things. In one room, we see how the caves were built. The piece is not finished but the head of Buddha began to be carved. There is also a reclining Buddha which represents the last teaching of the Buddha, or dharma when he reached nirvana. 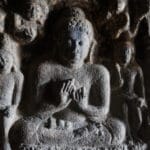 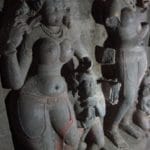 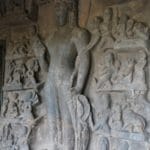 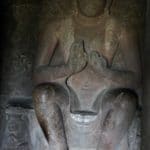 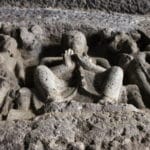 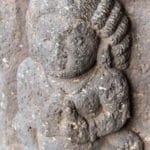 How to get to the caves of Aurangabad

The caves are located behind the Bibi ka Maqbara which is about 3KM. It is imperative to get there with a vehicle. If you take a rickshaw, you must negotiate with driver so that he will wait for you to take you to the second group of caves as well as to the town afterwards. You will not find a rickshaw or taxi outside the caves.

We offer a tour to discover the history and culture of Aurangabad. This tour will give you introduction of Buddhism and let you explore the Aurangabad caves.