In a previous article, we discussed the history of Daultabad fort. In this one, we will discuss the different monuments that are to be visited in the fort.

How to get to Daultabad fort?

The fort is located on the highway between Aurangabad and the Ellora Caves.
It is very easy to get there from Aurangabad by taking a taxi, a rickshaw or a bus.
It takes between 30 minutes to 45 minutes to reach the fort, depends on the traffic. Choose to visit it in the early morning when weather is still cool because there are only few shaded areas in the fort.

How is the fort?

The fortress had 4 lines of defense which divide it into 4 distinct zones. Ambarkot which is outside the fortress. This area has never been declared a protected archaeological site. Mahakot which is the second line of defense of the fortress. Kalakot with its impressive wall and sumptuous palaces and finally Balakot named after the colony where the palace is located. What is currently known as Daultabad is Mahakot, Kalakot and Balakot.

Strategically the fort had only one entry to divert the enemies. What they meant is that you will come home and will go out from the same entrance.

First part of the visit: Mahakot
After purchasing your tickets, you will pass control of the tickets under the first big gate of Mahakot then a court where they exhibited different cannons. The prettiest cannon of the fort is not found in this court but higher up in the fort.

You will then pass another tall door. The doors are very tall because in India, the wars were happening with the help of elephants. You will admire Daultabad’s first defense system, which consisted of building off-set gates. There were two functions to that. The first allowed to control the flow of people returning to the fort. And in case of attack, it slowed down the enemy.

Passing the second door, you will be in the street of the bazaar.

The street of the bazaar:
This is the main access to other parts of the fort. It must be remembered that the fort was actually a fortified city and an empire capital.
You will admire some kinds of vaulted rooms. This was the place where they had market stalls.
A little higher on the left, take the stairs to see Hathi haud.

The elephant reservoir (Hathi haud):
It is about 38 meters on each side and more than 6 meters deep. The name literally means Elephant’s bathhouse, although the narrow steps that lead to it, and the width of the walkway around, do not support such a tale! Simple and solid without any decoration, the tank is an example of utilitarian construction. Most likely, it served as an internal reservoir for the Mahakot, providing enough water to support a large population and maintain the garden and orchards. It could also have been used as an ablution tank for visitors to the nearby Great Mosque.

Chand Minar:
More than 30 meters high, with a diameter of 3 meters at the base, the Chand Minar completely dominates the landscape around Daulatabad and which is built by Bahmanis. Conceived as a victory tower on the conquest of the Deccan at the end of the 13th century. Three circular balconies, at somewhat regular intervals, cantilevered, form the circular tree of the tower, supported by radiant consoles.
A spiral staircase inside the tower, now closed to visitors. At the base of the Chand Minar, there is a small cubic building with fluted roundings, typical features of Bahmani architecture. 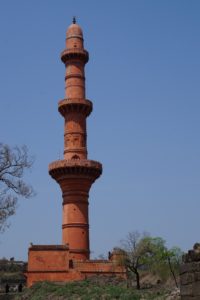 The palaces of Daultabad fort: Balakot

Tower of defense:
The most notable Mughal additions to this part of Daulatabad is the huge cannon known as Mendha Toph mounted on a circular rider built in the west of Chini Mahal, opposite to the Bahmani Palace. Built in massive masonry, the rider supports a large pistol with a curious ram’s point.
The mounting mechanism on the jumper indicates that this gun could be rotated both horizontally and vertically in 180 degrees, allowing more accuracy on a long-range lens. A Persian inscription engraved on its handle names the Quila’Shikan gun (destroyer of the fortification). 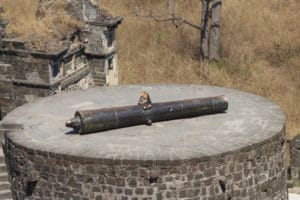 Chini Mahal:
The Chini Mahal (Chinese palace) takes its name from the blue ceramics designs that adorn its facade. In an extremely fragmentary state, partly undiscovered and largely ruined, the Chini Mahal presents a mystery, since its original function remains unknown. Today, the building consists of a portal that leads into a longitudinal hall, with a raised platform flanking one side of the interior.
The Chini Mahal was originally part of the complex of palaces, pavilions, gardens and elaborate royal quarters. After taking control of Daulatabad, the Mughals converted this area into a stage for defensive works. Bastions and riders have been added and the Chini Mahal has been refitted as a prison. The last sultans of Bijapur and Golconda, namely Sikandar Shah and Abul Hasan Qutb Shah, who died here in 1686 and 1699 respectively. 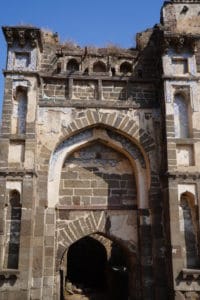 Brahmani Palace:
This palace is in restoration, has a central dome-shaped room, while the side rooms are covered with pyramidal vaults, the latter being a typical feature of Bahmani architecture.

Crossing the bridge to access the last part of Daultabad Fort, you can admire the moat artificially create. You will also see how the mountain was cut to separate it from the rest of the fort. The defense tower in just opposite, allowed for greater control of the entrances and exits of the fort. The artificial moat was filled with piranhas and crocodiles according to historians.

After the first dark passage, you will arrive at the entrance to the citadel. It is a wandering tunnel which, in time of siege, becomes impassable by an ingenious device. This underground passage is indeed mysterious and despite the attempts of several individuals, all its mysteries are still unknown.

The long ascending tunnel rises rapidly and tortuously through a set of steps, unequal in width and height, difficult to climb in the absence of light. Turns and twists lead to a window, now covered with railings, but which was originally a trap for enemy intruders, who, as they entered, fell down a slope into a watery pit. The stairs in the courtyard were built in 1952 for the convenience of tourists.
After the dark passage, a long ascent begins until Mughal Baradari.

Mughal Baradari:
The pavilion was commissioned by Shah Jahan after he captured the fort in 1636. Formed of basalt blocks and partially plastered, the pavilion has an inner courtyard that gives access to a series of rooms including one with an octagonal facade with balcony to Arcades that offers great views of the entire site. Baradari has also been used by Aurangzeb. 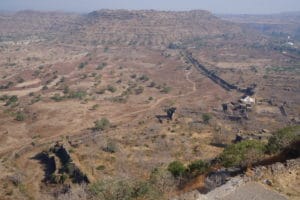 On the right, there is a path to access the cannon at the top of the mountain.

If you want to visit the Daultabad fort, do not hesitate to contact us.